On financial exchanges, an iceberg order is a limit order where only a fraction of the total order size is shown in the limit order book (LOB) at any one time (the peak), with the remainder of volume hidden. When the currently resting (outstanding) peak is executed, the next part of the iceberg’s hidden volume (tranche or refill) gets displayed in the LOB. This process is repeated until the initial order is fully traded or cancelled.

The processing of both order types is supported by the algorithm. Synthetic icebergs are identical to non-iceberg orders in how they are processed by the exchange, so they can only be detected heuristically and relying on a set of assumptions. An unambiguous detection of native icebergs is possible.

Below you can see the distributions of peak volumes and number of tranches on one trading day (as inferred by the algorithm):

Once an iceberg is detected, a prediction of its total size can be made.

The second tranche of volume 11 enters the book. At this point, we conclude that the order is indeed an iceberg, give an estimate of its total volume (equivalently, current hidden volume) and disseminate an AnalyticOrder instance.

More tranches then follow, each potentially having a different size. A more precise prediction is made upon detecting a new tranche. When the last tranche is executed, the order is removed from the book.

In this example, the iceberg order had 5 tranches, the peak volume was 11 and the total volume was 47.

Synthetic iceberg tranches are regular limit orders. Briefly, an incoming order is considered a tranche if it is placed within a small time frame after a previous order of the same size and price level had been executed. Hence there are the following notable differences with the native icebegs:

The dissemination model for synthetic icebergs is the same as for native ones. 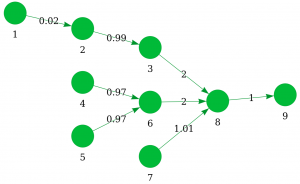 *  CME Iceberg Order Detection and Prediction article is distributed under license CC BY-NC-SA 4.0 and is also available at https://arxiv.org/abs/1909.09495).