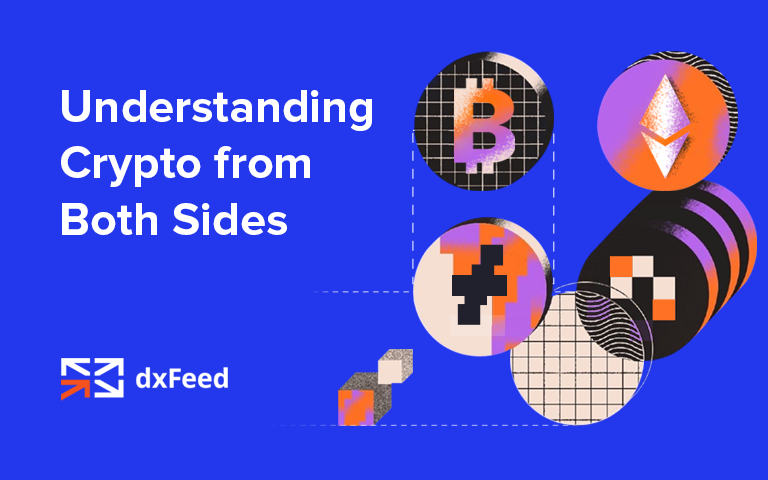 Some Thoughts from a Market Data Provider
As a market data provider, dxFeed is afforded a perspective that many other businesses don’t have the luxury of. Data is objective. A price feed details certain events that unarguably took place at a certain time. Should that data require refining in some way, for example so that it can be used as an input for a more complicated benchmark calculation, the methodologies employed are also objective, and thus unaffected by any broader narrative that exists around the underlying assets in question.

This means that we’re usually agnostic to the unique social, political, and regulatory intrigues of each asset class we cater for. Perhaps the only time our work overlaps with the realm of subjective opinions or politics, would be the inclusion criteria that define an index we’re constructing for a client. The construction of any index involves a very definite guiding principle, an outlook, that can be defined as political on some level. But again, this is entirely down to the decision-makers in the organization who are commissioning that index.

Crypto, however, is an asset class that forces an entirely new set of considerations on all participants. It appears very much like any other financial symbol when viewed through the lens of financial markets. But at the same time, the underlying technology is geared towards the creation of a completely different kind of financial and social infrastructure. An infrastructure that’s actually in direct competition with the incumbent one that the global financial system, and indeed much of human social organization, currently depend on.

Swap a crypto ticker symbol out, or focus on the order book in isolation, and it could be any other security. Consider it seriously as a social technology, and some parties could justifiably regard it as an existential threat to what we glibly call “business as usual.” The point here, is that what makes this market so interesting, is also why it has historically been as much of a challenge for corporate entities to understand and engage with as it has been for the regulators to oversee. 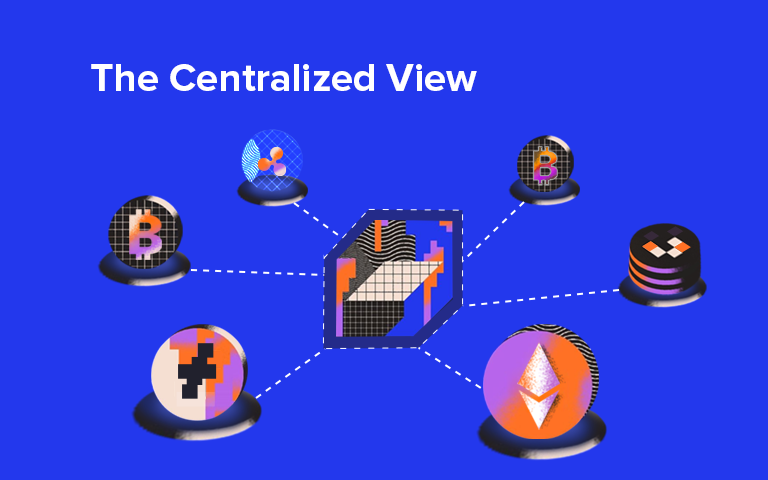 The Centralized View
Approaching crypto from an institutional perspective (be it as investor or liquidity provider), crypto markets currently exhibit certain qualities that we’re used to seeing from nascent asset classes. Institutional investors have been referring to crypto markets as “immature” for the 10+ years since Bitcoin’s inception. And even today, with all the institutional on-ramps that have been developed since 2019, it is still largely an immature market.

What this designation of immaturity refers to, functionally, for the institutions that may be sitting on the sidelines watching the space evolve, is primarily that crypto markets are still fragmented and illiquid when compared to their traditional counterparts. These characteristics also make them easier to manipulate, which has led, historically, to them being difficult to regulate. It’s hard to create walled gardens in crypto, so how do you bring it into a system of traditional business and finance that explicitly relies on walled gardens?

The past decade or so has seen spot crypto markets growing exponentially, but due to the above issues, as well as a host of other custody and clearing related bottlenecks, we’re still at the very earliest days of developing regulated, institutional grade derivative products that would bring the next wave of liquidity to the asset class. The fact that we’re still awaiting the approval of a regulated spot Bitcoin ETF in the United States reveals just how early we are.

Regulatory Obstacles
All the usual hurdles that apply to a new asset class are there for crypto, as evidenced by the lack of regulatory clarity in any major jurisdiction (perhaps with the exception of China’s outrightly hostile stance). But the nature of crypto as a technology makes it even harder to regulate because it’s a perpetually moving target for the parties who would try to understand it. Staying up to date with financial innovation in traditional markets is enough of a challenge, let alone a completely new technology that was the sole purview of the military and academic communities just a few decades ago.

Crypto obliges any party that would attempt to regulate it to remain at the cutting edge of what’s technically possible, which is so much harder than the role they’ve had to play up until now. In some ways the regulators are a couple of market cycles behind the curve. They’re still wrestling with harmonization of regulatory practices regarding the ownership, transfer, and trading of spot crypto assets (a 2013-2017 problem), while the last two market cycles have brought us on-chain governance, DeFi, yield farming, proof-of-stake consensus, and NFT marketplaces, among other things. Regulators tend to get a lot of flack, but you have to appreciate the truly Herculean task they have before them.

When we as a company engage in the creation of a crypto product or service for the top-down world, so to speak, we’re taking an institutional client’s idea and transforming it into a finished regulated financial product. This involves formalizing the methodology, sourcing and refining the data, including all the required redundancies, creating a reporting framework, as well as developing tools for the ongoing management of all the above.

The methodologies we employ, the manner in which we source and process data, the tools we create for reporting and management, have a dual purpose in that they’re also necessarily designed for the client to be able make the strongest possible case to their regulators that all required due diligence has been performed and protections to investors have been put in place. This is what we have contributed, as a corporate entity, in a number of high profile projects that have brought the bottom-up world of crypto innovation a little closer to the top-down world of centralized finance, its institutional investors, and its regulatory apparatus. 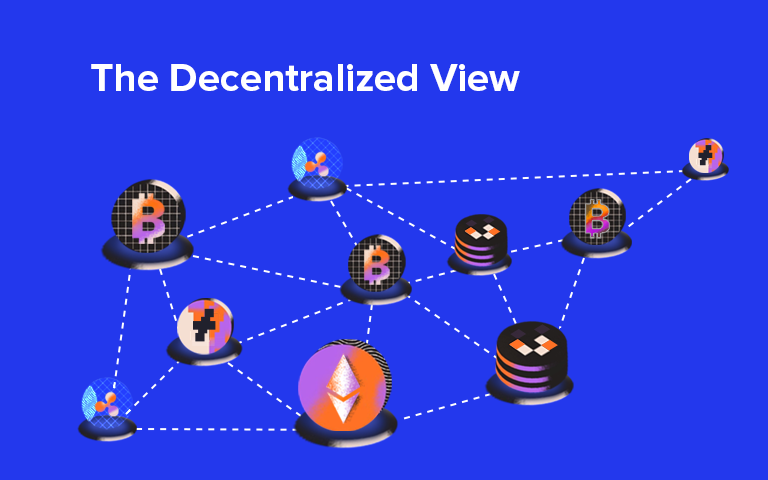 The Decentralized View
When viewing crypto from the ground-up, it’s important to understand that you’re dealing with an entirely different (many would say diametrically opposed) set of concerns and assumptions. For example, bitcoin’s status as a bearer asset may impose all manner of bottlenecks and regulatory hurdles for institutional investors, but from the bottom-up perspective these are features, not bugs. Let us not forget that bitcoin was created as a response to a global financial system that has, in a few short decades, gone from being pegged to a US dollar backed by gold, to a freely floating fiat system backed by nothing other than trust in the issuing government. To say nothing of the monetary expansion that global central banks have engaged in since the GFC and on throughout the pandemic.

Decentralized systems necessarily develop in a more sprawling and organic (some might say haphazard) way. Which is to say that when we as a data provider view the landscape from the bottom-up, we see plenty of opportunities in terms of what high quality data can offer the space.

The way decentralized systems achieve consensus on events that take place in the outside world is a perfect example of how a centralized data source can be an input to a decentralized truth-reporting machine. This is a foundational requirement for all subsequent innovation in the smart-contract segment because all the really interesting things people want to engage with (other than perhaps money itself) have some sort of basis in the physical world. For this reason alone there must be systems in place for blockchains to receive tamper-proof authoritative facts from the analogue world and we as a company have been actively exploring how our data can help a number of oracle projects across blockchains.

But we needn’t even get into the weeds about oracles. In reality, the questions that crypto left the world with after the 2017 boom/bust cycle have yet to be answered. By all appearances, these systems haven’t yet scaled meaningfully without sacrificing decentralization. Ethereum has yet to complete its transition to leaner, greener proof-of-stake consensus.

Furthermore, it’s difficult for investors to even compare like for like because the space lacks a reliable and agreed upon set of metrics (decentralization, throughput, transaction fees etc.) with which to compare the performance of these second and third generation smart contract blockchains. As things currently stand there’s a race going on and no one really knows who’s winning. Narrative drives price action but it’s difficult for interested parties to compare these assets along lines any more meaningful than market cap or daily volume.

These are all data problems, but they’re problems of a different order than the ones we encounter in the top-down world where what’s permitted has generally already been  established and innovation is tasked with playing within the rules. 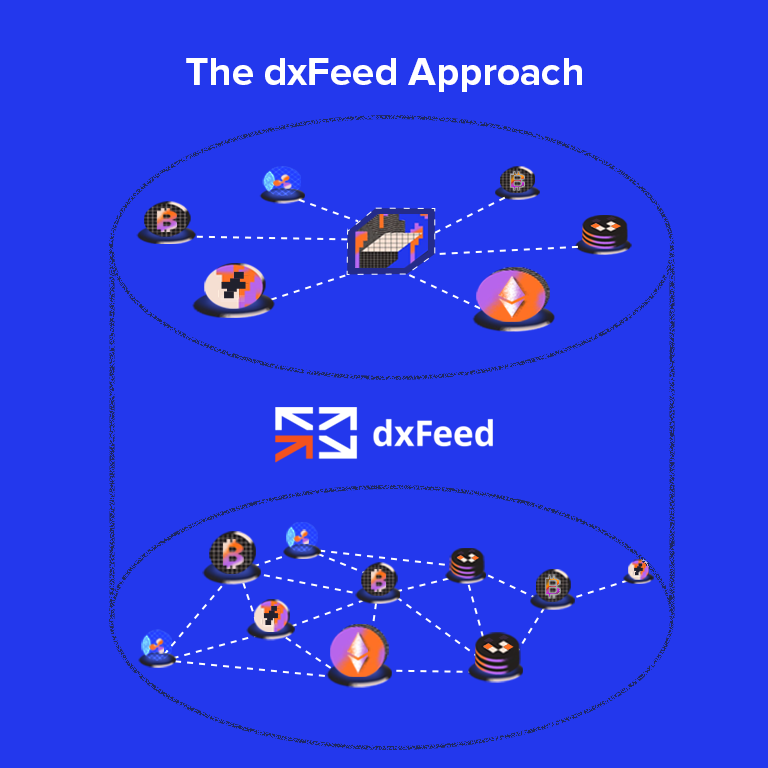 The dxFeed Approach
What we’re witnessing here is an intriguing evolutionary struggle between centralized and decentralized approaches to organization and fairness, top-down and bottom-up methods of achieving consensus and transacting on a global scale. The struggle is evolutionary in the truest sense, because it’s not a simple boxing match between two rival camps. Rather, it’s two systems developing independently in an uncertain environment in which what it means to be “best fit” is constantly changing.

We’re living and working at a juncture in history where these two worlds are starting to interpenetrate and it’s doubtful that anybody really knows where this is going, or how the world’s financial system looks in 20-30 years. To say nothing of how we even do democracy, going forward.

In recent months we’ve been sharing some of the innovative financial products that we’ve helped our clients bring to both institutional and retail investors in traditional finance. In the coming weeks we’ll be making some very big announcements that we believe businesses and individuals on both sides of the above divide will have reasons to be excited about. We look forward to going into further details. Stay posted.